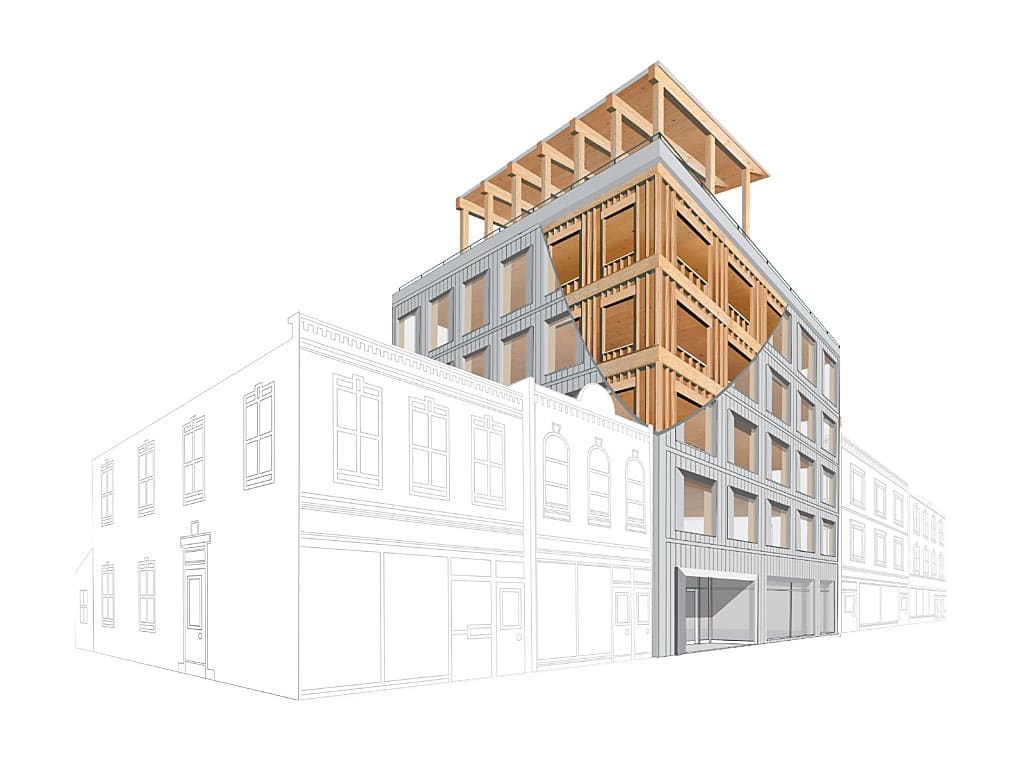 While many of us have built structures with heavy timber, Mass Timber takes building with wood to new heights, literally. It is important for all commercial contractors to be aware of Mass Timber. This relatively new system for building is probably coming to our marketplace soon and can revolutionize how America builds.

Mass Timber is comprised of multiple solid wood panels glued or nailed together, which provides exceptional strength and stability. It is a strong, low-carbon alternative to concrete and steel. Mass timber building designs are pioneering better places for us to live and work. New code changes that were passed for the 2021 code cycle allow mass timber buildings up to 18 stories tall.

A relatively new set of advanced building systems, mass timber developments offer many benefits when compared to buildings constructed with other load-bearing material:

Challenges include a more front-loaded, manufacturing-oriented approach to integrated design that requires teams of architects, engineers, contractors, and manufacturers to work closely together, and at higher levels of detail resolution.

Glulam is a structural engineered wood product commonly used for beams and columns in residential and commercial applications. Glulam allows for long spans of exposed framing, as well as attention-grabbing curvatures.

CLT is a wood panel system that is rapidly gaining in popularity in the U.S. after being widely adopted in Europe. The material’s strength, dimensional stability, and rigidity allow it to be used in mid-and high-rise construction.

NLT is a century-old construction method that is undergoing a design renaissance. It can be found in historical buildings as well as in new projects, where its structural performance and design elegance come together to create inspiring spaces.

DLT is gaining traction for its ease of use with computer-controlled (CNC) machinery—such as lathes, routers, and mills—and its all-wood composition. DLT is similar to NLT but uses wood dowels to join boards instead of nails or screws.

With recent changes in building codes, and a quest to find more sustainable ways to build up, we are seeing a marked rise in the number of taller mass timber buildings popping up across North America and the globe. Buildings constructed of heavy glue-laminated timber columns and beams with cross-laminated (CLT) timber floors, walls, and roof decks are becoming more commonplace.

The 87,000 square foot John W. Oliver Design Building at the University of Massachusetts Amherst is another example of a recent finished and regionally significant mass timber building.

Combining wood and concrete or steel in hybrid construction provides a cost-effective and sustainable solution for many occupancy types as well as improving building performance and design.

The 52,000 square foot Bullitt Center in Seattle opened in 2015 with 4 stories of mass timber above two stories of reinforced concrete and is an example of a hybrid building system.

Mass timber chars in a major fire but does not burn. Mass timber is much more stable than unprotected steel in a fire.

Thanks for visiting the blog. If you have a question, please do
get in touch.