Building electrification refers to using electric technologies instead of combustion-fueled technologies to supply the comforts of a modern building. An electrified building typically uses electric heat pumps for space heating, cooling, and domestic hot water, as well as electric or induction stoves for cooking. Every major end use for fossil fuels in buildings is ready to be electrified with currently available technologies.

The New Paltz Police and Court Municipal building that was recently completed for the Town of New Paltz is fully electric, employing no fossil fuels in the design.

Electrification supports the long-term goal of building decarbonization. That is because the electricity grid is getting greener and cleaner. By designing and constructing buildings to harmonize with the grid we will reduce overall greenhouse gas emissions.

Heat pump technologies use energy in highly efficient ways and, therefore, save building owners money. Heat pumps — whether ground-source or air-source — are basically air conditioners that can be run in reverse to provide heating as well as cooling. Air conditioners (and refrigerators) make a space cooler by extracting heat from it and releasing the heat in a warmer place. The key to this magic is the refrigerant, a fluid that changes from a liquid to a gas at ambient temperatures. After absorbing heat, the gas moves through a mechanical compressor that squeezes the heat back out.

Electric resistance heat is 100% efficient at converting electricity into heat, a heat pump provides, at least, two to three units of energy for every one unit of energy consumed. Efficiency is often measured as the annual “coefficient of performance” or COP.

The COP of a system is the relative measure of how much energy is delivered compared to how much energy is used. Most air source heat pump systems have an average annual COP of over 2.5. This means that the system is 250% efficient. Fossil fuel heating systems range from 80-95% percent efficient, at best. 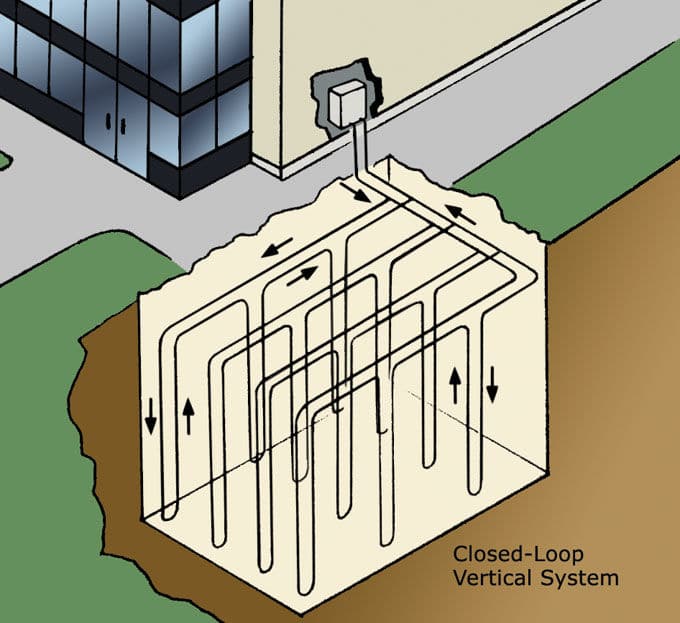 In commercial applications most GSHP systems rely on a field of drilled wells fitted with a closed loop set of tubing through which fluid flows. By releasing building heat to the cool earth, rather than into hot outdoor air, GSHPs cool more efficiently than air conditioners or air-source heat pumps. They provide heat by using the same principle in reverse—drawing heat from the relatively warm earth, rather than from cold outdoor air. Most GSHP systems have a COP of over 3.5.

GSHPs should not be confused with true geothermal heat, which is usually miles below the surface, where the earth’s crust gives way to a layer of molten rock. This geothermal energy occasionally explodes to the surface as a volcano, creates natural geysers and hot springs, and, in places like Iceland, it is tapped to produce electricity.

Air Source Heat Pumps (ASHP) extract heat (energy) from the outside air when heating is needed and discharge heat to the outside air when cooling is needed. Air Source Heat Pump systems are available in many sizes and form factors, including small and large ducted systems as well as small ductless “mini splits” systems. In all cases the compressor system is located outside the building.

Our Net-Positive-Energy office building is served by two Carrier Green Speed ducted systems. The compressors are located outside the building and the air handlers are located inside. Carrier claims that the green speed system has a COP of over 3.5

In cold climates, a GSHP has a higher efficiency than an air-source heat pump, because the temperature underground is considerably warmer in the winter than the outside air.

The initial GSHP systems cost is higher than an air sources system. However, system efficiencies are higher, and the equipment lasts longer. Further, there are significant utility incentives in NYS as well as a federal investment tax credit for private development projects that use ground source heat pump systems.

The U.S. is now adding renewable energy generation faster than any other source, which is putting us on a path to rapidly decarbonize the electric grid. In some parts of the U.S., the grid is already relatively clean. And President Biden’s Clean Electricity Standard, proposed through his Infrastructure Plan, would set the United States on a path toward 80% clean energy on the grid by 2030.

Renewable electricity generation has more than doubled from 2020 to 2018 and that trend is accelerating. According to the US Energy Information Agency ninety percent of that increase came from wind and solar generation.

Costs have also declined rapidly. Solar and wind generation is the cheapest option for new or replacement electricity generation capacity. This capacity also includes electric energy storage assets owned by utilities (“utility scale”) and smaller distributed energy resources. Electricity generation from wind and solar is poised to surpass fossil fuel generation in the next 25 years, if not sooner.

We can easily future proof the buildings we design, and build, today to save money and carbon, now and in the future. Using all electric space conditioning systems is the best way to make our buildings energy and cost efficient.

This article by architect Rick Alfandre originally appeared on page 42-43 of the Summer 2021 issue of  On The Level, the publication of the Construction Contractors’ Association.

Thanks for visiting the blog. If you have a question, please do
get in touch.